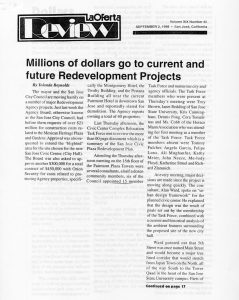 The mayor and the San Jose City Council are moving hastily on a number of major Redevelopment Agency projects. Just last week the Agency Board, otherwise known as the San Jose City Council, had before them requests of over $21 million for construction costs related to the Mexican Heritage Plaza and Gardens. Approval was also requested to extend the ‘blighted’ area for the site chosen for the new San Jose Civic Center, (City Hall). The Board was also asked to approve another $300,000 for a total contract of $450,000 with Orion Security for costs related to protecting Agency properties, specifically the Montgomery Hotel, the Twohy Building, and the Pestana Building all near the current Fairmont Hotel in downtown San Jose and reportedly slated for demolition. The Agency reports owning a total of 40 properties.

Last Thursday afternoon, the Civic Center Complex Relocation Task Force met to review the more than 60-page document which is a summary of the San Jose Civic Plaza Redevelopment Plan.

At every meeting, major decisions are made since the project is moving along quickly. The consultant, Alan Ward, spoke on “urban design framework” for the planned civic center. He explained that the design was the result of goals set out by the membership of the Task Force, combined with a current and historical analysis of the ambient features surrounding the proposed site of the new city hall.

Ward pointed out that 5th Street was once named Main Street and would become a major tree lined corridor that would stretch from Japan Town on the North, all of the way South to the Tower Quad in the heart of the San Jose State. University campus. Parts of 5th Street will remain open to vehicular trafﬁc but become available only to pedestrian use from the southern curb of East Santa Clara to the University.

He explained that the essence of the design was intended to integrate the civic center into the planned and existing nearby structures. Of equal importance, he said, was an awareness of the Mediterranean climate in San Jose and the micro climate of the particular site.

The planned move of City Hall to this new location is not without critics. At the Redevelopment Agency meeting of August 25, the Agency Board discussed in closed session the suit by former mayor Al Ruffo who is challenging the intended “sale or lease of the old civic complex” as a way to justify and pay for the new civic center. The suit has not been discharged and the planning may be for naught. Ruffo contends that the conditions for the use of the current civic center site do not allow its sale or use for other purposes than as a civic center. To do otherwise will return that property to the heirs of the donors who gave that land to the city. The location was once the site of an arboretum that the proud owner had donated to the city and later agreed to its use as a civic center.

Others in the city protest that the current site is very accessible to the public, both of those traveling there by car or by those who use the light rail. The light rail runs along First Street and is less than half a block away from the front door of the present city hall and far less than from its side entrance.

Traffic remains a major concern of many San Joseans for the already congested status of the area in the surrounding the proposed site for the new civic center. When asked for comments from the general public at the very end of Thursday’s meeting, the Reverend Larry Burroughs, of the nearby First Presbyterian Church, which has not only its church located there but a senior citizen low income apartment complex as well, explained that he and his fellow associates and the residential community they serve were very concerned, not only with the anticipated peak hour congestion but the general ﬂow of trafﬁc in the vicinity.

Traffic and parking will be major concerns. Within what is termed the “civic center complex” of this seven block area there will be a new 1800 seat performing arts theater, two churches, the First Presbyterian Church and the First United Methodist Church of San Jose, another small theater, Le Petit Trianon, an ofﬁce tower, the hoped for University/ City library, several complexes of residential housing, the existing grocery store (Lucky’s) and three parking structures, one of which will be underground for the new city council chambers.

The new civic center will be designed to meet the anticipated space needs projected for the year 2028 and is expected to accommodate the approximate 1700 city employees who are currently employed with the city.

In the documents produced for public review, the belief is stated that the, “position (of the civic center) in the downtown is advantageous for a democratic setting.” Such a comment suggests accessibility when in contrast throughout the report it is stated that an objective for the new location is to “Make Civic Plaza less car dependent than other downtown ofﬁce buildings, encourage transit use… do not overbuild parking.” The light rail is at least a five-minute walk from the proposed site. It also states that there are planned, “separate access and non-public areas… with secure and private rest rooms and security for elected officials and major dignitaries.”

Task Force member Cora Tomalinas asked for details regarding parking and the extent to which the public would be separated from city ofﬁcials. Frank Fiscalini assured her that public access to public officials would be similar to that provided currently at city hall and applauded measures to protect the secretarial staff from abusive people. The language in the document appears to suggest greater separation than currently exists.

Adams, the urban design planner without detailed estimates of the parking needs for each structure assured Tomalinas that there were numerous garages and spaces planned for those needing access to City Hall ofﬁces and personnel. He did not answer her question regarding restricted public access to city hall offices and passageways.

A committee of Task Force members, along with selected city staff, will be interviewing two or three architects for the actual design of the new civic center structures. San Jose City Public Works Director Ralph Qualls pointed out that the next step for relocation of the civic center will be to present the recommendations to the City Council for approval at the Dec. 1 meeting. This will allow design work to begin in January. The Council will begin the acquisition of land for the project with a hope for completion date of July, 2000.

The next Relocation Task Force meeting is scheduled for Oct. 29. Kris Cunningham asked for public involvement. It was decided that following the selection of the architect, meetings and a traveling exhibit would be scheduled throughout the city. Other separate but as important meetings have been scheduled to discuss the proposed merger of the city’s Martin Luther King Main Library and the Wahlquist Library at San Jose State University. The Wahlquist Library serves over 29,000 students.

Beyond these speciﬁc projects for discussion at the September 3 meeting of the Redevelopment Agency, the Agency Board will be asked to approve a request to double the fees to Keyser Marston for another $250,000 in order to “add several areas for potential new redevelopment project areas.”

No details are available as to scope of the “projects” nor where the “project areas” will be. Already over 10,000 acres of San Jose most valuable properties are under jurisdiction of Redevelopment. According to the memo written by the Redevelopment chief, Frank Taylor, “A majority of KMA’s services ($250,000) have been devoted to formation of the proposed Civic Plaza Redevelopment Area, including Project Area Committee (PAC) formation as well as, feasibility studies of seven retail cluster areas.”