Fallon Statue: A revision of History? 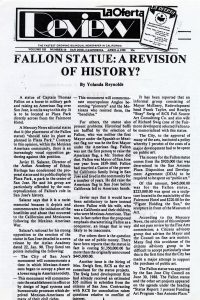 A statue of Captain Thomas Fallon on a horse in military garb and raising an American flag over San Jose, is on its way to this city. It is to be located at Plaza Park directly across from the Fairmont Hotel.

A Mercury News editorial states that it (the placement of the Fallon statue) “should take its place as planned in Plaza Park.” Contrary to this opinion, within the Mexican American community, there is an increasingly vocal opposition gathering against this position.

Javier H. Salazar, Director of the Aztlan Academy of Ethnic Heritage has condemned the proposal statue and its public display in Plaza Park, a park in the center of San Jose. He and his group are particularly offended by the conceptualization of Fallon’s role in San Jose’s history.

Salazar says that it is a racist memorial because it depicts and commemorates the initiation of the hostilities and abuse that occurred to the Californios and Mexicanos following the Mexican American War.

Salazar’s rational for his strong opposition to the erection of the statue in San Jose detailed in a news release by the Aztlan Academy dated 22, Jan. 90. They listed ten points including the following:

Javier says that it would have been satisfactory to have instead shown Fallon with his wife, who was a Californio and their children, who were Mexican-American. That too, is fact rather than the proposed emphasis characterizing Fallon as a conqueror, an image that is very likely to be inaccurate.

Another issue is the hiring of Mrs. Swig’s firm, RCS as the art consultant for the statue projects. The Swig’s hotel development firm had already received an estimated $35 million in subsidies from the citizens of San Jose. Contracting with RCS for consultation raises questions relative to conflict of interest.

It has been reported that an informal group consisting of Mayor McEnery, Redevelopment head Frank Taylor, and Roselyn “Sissy” Swig of RCS Full Source Art Consulting Co. and also wife or Richard Swig (one of the Fairmont developers) selected Fallon to be memorialized with this statue.

The City, to the approval of many of the arts, instituted a policy whereby 1 percent of the costs of a major development had to be spent in public art.

The money for the Fallon statue comes from the $920,000.00 that was determined in the San Antonio Plaza Disposition and Development Agreement (DDA) to be required to be spent on “public art.”

According to the Mercury News, the selection of this sculpture did not pass review by the Fine Arts commission; a Citizens advisory group that advises the Mayor and the Council on fine arts matters. Many find this avoidance of the citizens advisory group to be difficult to accept particularly since this is the first time that the City has made a major attempt to support the purchase of public art.

The Fallon statue was approved by the San Jose City Council on June 30, 1988. The Fallon statue and the other art projects appeared on the agenda under the heading “Status Report: 1 percent Funding Art Program – San Antonio Plaza.”

Exactly where the statue is to be located is a matter of concern. Historians have pointed out that there are legalities that should be addressed if the statue were indeed placed directly in the Park Plaza, because this is Pueblo land and was deeded for public use during the Spanish colonial period by the King of Spain to the people of San Jose, and is subject to special regulations and law.

Under the Treaty of Guadalupe Hidalgo, the agreement made at the conclusion of the Mexican-American War, these grants were to be honored by all following legal American governmental entities.

The Fallon statue is currently scheduled to be discussed at the May 3, 1990 Redevelopment Agency Board meeting. For further information or to express you opinion, call either Mayor McEnery at 277-5237 or Javier Salazar at the Academia at 298-7478.

The Aztlan Academy of Ethnic Heritage has organized a meeting to take place at the Executive Conference Room, Hospital & Health Care Workers, Local 3250, 453 West San Carlos Street in San Jose, on April 5th at 7:00 p.m. to discuss this matter. 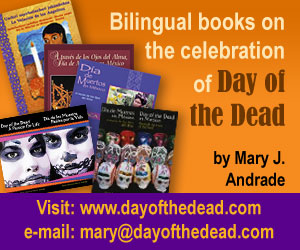