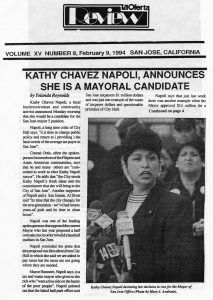 Kathy Chavez Napoli, a local businesswoman and community activist announced Monday morning that she would be a candidate for theSan Jose mayor position.

Napoli, a long-time critic of City Hall says. “it is time to change public policy and return to (providing) the basic needs of the average tax payer in San Jose.”

Conrad Ortiz, often the spokes-person for members of the Filipino and Asian American communities, says that he and many others are “committed to wait to elect Kathy Napoli mayor.” He adds that “the City needs Kathy Napoli’s fresh ideas and the commitment that she will bring to the City of San Jose.” Another supporter of Napoli and a San Josean, Al Drost said “it is time that the city changes for the new generation – we’ve had twenty years of junk and its time to clean house.”

Napoli was one of the leading spokes persons that opposed the current Mayor who last year proposed a half cent sales tax in order to build a baseball stadium in San Jose.

Napoli reminded the press that this proposal was like others from City Hall in which she said we are asked to pay taxes but the taxes are not going where they are needed.

Mayor Hammer, Napoli says, is a tax and waste mayor who gives to the rich who “want a free ride on the backs of the poor people.” Napoli pointed out that the failed ball park effort cost San Jose taxpayers $1 million dollars and was just one example of the waste of taxpayer dollars and questionable priorities of City Hall.

Napoli says that just last week there was another example when the Mayor approved $14 million for a movie complex. Napoli rejected the claim by Mayor Hammer that building this new complex was urgent and that the sum of money to be spent was only a small investment. Mayor Hammer, Napoli says had justiﬁed the approval of the complex as an “urgent need” and the cost was just a “small investment.”

Napoli pointed out that there were other pressing needs in the City, such as library books, recreational programs for the City’s youth that she felt were of higher priority and she questioned why there was an urgency of a movie theater in San Jose when there are already 50 movie houses in the City.

Darlene Marquez, a San Josean and also a community activist says “I am very proud of Kathy – she will make a big change – we have not had a representation since Susan Hammer became mayor.

Ross Signorino, who along with Kathy Napoli was a leader in the defeat of the ballpark proposal said, “I worked with Kathy and I got to know her quite well – she is dynamic, sincere, very honest – the community will be her primary concern in anything that she does.”

Irish American Dale Warner and a frequent spokesperson on ethnic related issues, says, “I believe that Napoli will be a more authentic voice for diversity than the current mayor.”

She was ﬂanked by her family and many supporters at the press conference who frequently broke into cheers as Napoli announced her position on a number of issues. Napoli is married and has two sons, Michael and Bob.

Bill Napoli, her husband, asked what his reaction to the burden of a campaign, said that, “this is what she wants to do and I will support her in whatever way I can to help her out.

Napoli’s campaign headquarters can be reached by telephone at 298-1010. © La Oferta Newspaper.