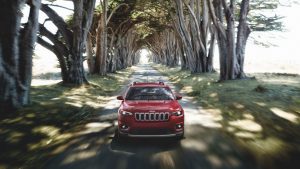 As the largest of Jeep’s fleet of small-ish crossovers, the 2020 Cherokee distinguishes itself from its showroom brothers (notably, the nearly-as-large Compass) with its off-road capabilities. These include impressive towing capacity, when properly configured, while the Trailhawk version offers a level of off-road versatility unusual in its class.

The Cherokee also has a comfortable ride and is available in almost all versions with either front-wheel-drive or all-wheel-drive configurations. Though slightly larger than its sibling, the Mexico-assembled Compass, the U.S.-built Cherokee offers less maximum cargo space. Further, the Cherokee offers subpar fuel economy compared to its raft of competitors.

The Cherokee underwent a significant mechanical and cosmetic update for the 2019 model year, so changes to the 2020 version are minimal. Newly available, though, is an Advanced Safety Group package that includes lane-departure warning, forward-collision warning, and rain-sensing windshield wipers. Jeep also is offering two new paint colors for the new year: Sangria and Spitfire Orange. 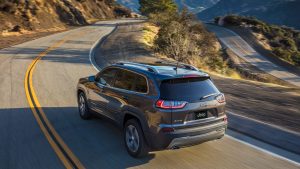 The standard four-cylinder engine and optional V-6 are joined by an all-new turbocharged 2.0-liter four-cylinder. It makes 270 horsepower and 295 lb-ft of torque (56 more than the V-6) and slots at the top of the powertrain pyramid. While we’ve yet to test the new engine at the track, we’ve spent time with it during our first drive. We found the turbo four to be lackluster compared with the V-6 due to its dull responses to throttle inputs; the new four-cylinder Cherokee also has less towing capacity (4000 pounds maximum towing capacity versus the V-6 Cherokee’s towing capacity of 4500 pounds).

As you’d expect from a Jeep, the Cherokee drives with heftiness and solidity, making it feel larger than its rivals. Despite its off-road abilities, the Cherokee is still based on a car, meaning it provides a comfortable ride and decent handling on the road. Relatively firm suspension tuning controls body roll in corners without compromising the ride quality. Impacts are absorbed without much excess reverberation, and the Jeep never feels floaty on the highway. 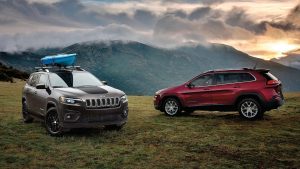 We wish the steering provided more feedback from the road, but it’s nicely weighted and accurate. A firm-feeling brake pedal engenders calm in panic-braking scenarios, and the Cherokee’s 70-mph-to-zero emergency-braking performance is average for its class.

The Cherokee has among the worst fuel economy in its compact-crossover and SUV segment, according to both the EPA and our real-world testing. While we’ve yet to subject either four-cylinder version to our highway fuel-economy test, their EPA estimates aren’t much higher than those for the V-6. Compared with the last Overland we subjected to our testing regimen, the latest version earned 25 mpg highway—or 1 mpg more than before.

With supportive seats and easy-to-use controls, the Cherokee’s cabin is comfortable. An attractive dashboard that mimics the larger and more expensive Grand Cherokee’s layout helps cultivate an upscale feel. However, given that the Cherokee is larger on the outside than many of its competitors, we’d expect it to feel more spacious on the inside. Small windows and high windowsills contribute to the feeling of confinement. 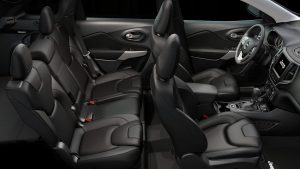 The Cherokee’s cargo area is smaller than most vehicles this size, and interior cubby storage is average at best. It’s more difficult to load items into the rear than into some of its rivals due to the Jeep’s high lift-over height. In addition, its cargo area is significantly smaller than top rivals such as the Ford Escape (34 cubes) and the Honda CR-V (39).

The Jeep’s available Uconnect infotainment system is among the best in the business, with well-organized menus and ample features. Starting on the Latitude Plus trim, every model adds two USB ports on the back of the center console for use by rear-seat passengers. Now that every Cherokee has Apple CarPlay and Android Auto capability, too, all that’s missing is a way to have it read your thoughts.

The 2020 Cherokee has not been crash tested by either the National Highway Traffic Safety Administration (NHTSA) or the Insurance Institute for Highway Safety (IIHS). Jeep offers a full range of optional driver-assistance features, but most of them are only available on the more expensive models that are equipped with an optional package, meaning you’ll spend more than $30,000 for the safest Cherokee. Key safety features include: 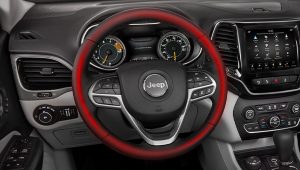 The Cherokee’s warranty coverage is average for its class. Competitors such as the Kia Sportage and the Hyundai Tucson are the only rivals that offer significantly longer powertrain warranties.

The Cherokee is available with the Jeep Wave ownership program, which provides original owners with complimentary scheduled maintenance for the first two years. The Jeep Wave program is standard and Overland and Trailhawk models, but customers of lesser Cherokees can opt-in by paying a fee.