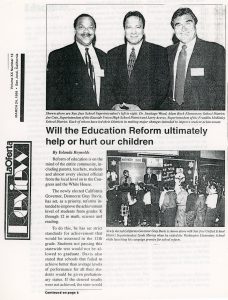 Reform of education is on the mind of the entire community, including parents, teachers, students and almost every elected official from the local level on to the Congress and the White House.

The newly elected California Governor, Democrat Gray Davis, has set, as a priority, reforms intended to improve the achievement level of students from grades K through 12 in math, science and reading.

To do this, he has set strict standards for achievement that would be assessed in the 12th grade. Students not passing this statewide test would not be allowed to graduate. Davis also stated that schools that failed to achieve better than average levels of performance for all their students would be given probationary status. If the desired results were not achieved, the state would take over the schools or the parents could establish a “charter school.”

Governor Davis expects the proposed legislation to be on his desk by April for final approval. His recommendations require the approval of both the State Senate and Assembly.

Last Saturday morning, a number of State legislators, Senator John Vasconcellos, Senator Byron Sher and Assemblymen Tom Lempert, Mike Honda, all of whom represent some portion of the residents of Santa Clara County, met with parents, educators and others to discuss modifications to the legislation the governor has proposed and, most importantly, to hear the concerns of parents, educators and school administrators.

The most controversial proposal by the Governor regarding education involves the matter of accountability. No one argued against accountability. However, the proposal, as initially pro-posed, failed to consider the varying backgrounds such as previous education, English language proficiency etc. of the students. It has been modiﬁed to reflect the actual curriculums which are provided the students. The new process also provides that schools whose students are not performing at the 50th percentile on the yet to be developed achievement test are to be placed in a status to be known as lntermediate/Underperforming Schools pro-gram (IUS). The statewide test to be used as an “Academic Performance Index” is to be ready and administered by June of 2000. In the original proposal of the Governor, low performing schools would automatically be taken over by the State.

According to a legislative summary on this bill, SBIXI, the legislation establishes, “the creation of an Academic Performance Index (API) in order to rank all California public schools; it establishes an “intervention program to assist low-performing schools”, and establishes “a reward program for high performing schools.”

It was with swift attention to the details by Senator Vasconcellos and other concerned colleagues in the legislature that some of the more damaging features of the bill have been modified. One major improvement is that school rankings will be based on schools having similar demographics which include such characteristics as English Language proficiency, wealth and educational level of the parents, rather than just tossing all of the schools together regardless of their advantages or disadvantages for a single ranking. Other very important elements have been introduced to assure that schools and students are not penalized for positive achievements that the proposed test may not be able to assess.

A number of parents and teachers were concerned that the test put enormous emphasis on four subject areas; math, reading, science and English, that may lead to the exclusion of other subjects and skills that are considered important for a well-rounded education and may be of extreme importance for some students. For example, the study of music, in particular learning how to play a musical instrument, has been shown to improve a student’s math and science skills.

This statewide testing program will require schools to collect far more data on each student in a central ﬁle for reports that will now be required by the State. There are over 8,000 school districts in the State and there are approximately 5.5 million K-12 students in California. Few schools have such data collection systems or the extra personnel that this data collection program requires.

The Teacher Review Process that has been proposed by the Governor concerned a number of educators, including most of the school administrators who spoke out on this matter. Larry Aceves, Superintendent of the Franklin McKinley School District in San Jose, pointed out his concern regarding this proposal because it replaces a program BTSA (Beginning Teachers Support and Assistance) of in service days for his teachers. Aceves explained that he has a year around school which has 800 teachers. In the last two years, teacher retirements, increased student enrollments and class size reductions have required that he hire 240 new teachers. The Superintendent of the Palo Alto Schools also lamented the loss to his District of BTSA which, he says, is “one of the best programs that IS Working in the schools.”

The discussion on Saturday morning quickly used up the two hours set aside for the meeting. Senator Vasconcellos and the other legislators determined from the discussion and the questions of those that came together on Saturday morning that many more meetings and discussions were needed in order to educate parents and the educational community regarding the impact and significance of this legislation on the future of education in California. The legislators agreed with Assemblyman Honda, who pointed out that the involvement of the entire community, in particular parents and teachers, to affect the desired improvements.

Sal Alvarez, who spoke on behalf of the County Office of Human Relations, expressed concern for the continued high drop-out rate of Latino youth from school. He expressed his concern that there had been no acknowledgment in Sacramento that “California ranks 46th or 47th in school funding.” He added that students in such schools as Washington Elementary would be compared with students from more afﬂuent homes who have such advantages as computers in their homes and parents who are very familiar with the educational process are at a great advantage. He explained that, “in a recent poll of 300 families in the Washington area, not one had a computer in their home.” He also lamented that “the State had provided very little money or training for parent participation” in the schools.

Administrators and teachers spoke to the low pay of teachers and the high cost of living in the area. This results in difficulty in attracting people into the teaching profession and the inability to get teachers to locate in the Santa Clara Valley.

Their teacher of over seven years, Shirley Lin, who obviously enjoys teaching music and loves her students, more than once turned to the parents and told them she was thinking of leaving the profession because of the low pay. She also told of the lack of funds for the purchasing of instruments and music for the children. For the parents, it was hard to hear her lament for low pay since the majority of parents in that District earn even less, although many work two jobs. Andrea Perry, whose daughter is a senior in the San Jose Unified School District, pointed out to La Oferta that the matter of salaries is serious, as is the disparity of income in this Valley and that both impact the performance of students in the area’s schools. Perry explained that the median salary in the Valley is $82,000 per year. A low income in this area is considered to be $57,000 per year. A recent report by the labor group, Working Partners, revealed that 40% of the workers in the Valley are “temporary workers,” many of whom work without beneﬁts and are not paid a “living wage.” Many of these temporary workers are paid the minimum hourly rate of $5.15 per hour and have no vacation, sick leave or benefits. Districts with large numbers of such low income family students are obviously at a competitive disadvantage. In spite of all of this, the school’s leadership and teachers are working very hard to help students be successful and to engage the parents in the education of their children. Aceves explained that over 5,000 parents in his District have completed training for parent participation, He, along with the other two East San Jose Superintendents, Joe Coto and Santiago Wood, and their staff have developed programs to help students and their parents in very special ways.

The Alum Rock School District hosts a Back to School event that has attracted well over 3,000 parents, at which time they can learn about the variety of special school and community services in which they and their children can participate and use. Last week, in a talk to the Hispanic Chamber of Commerce, Superintendent Joe Coto spoke of the need to assure and improve the graduation rate of the students. He also pointed out the importance of mathematics is the ultimate academic success of youngsters. He said that in a recent analysis to determine the factors inﬂuencing college attendance, the most important was whether students completed algebra in the ninth grade and geometry in the tenth grade. He said that this information has prompted him and other educators to demand that every student take and pass those courses at that time. To assure that this happens, his High School District, in cooperation with area Universities has developed summer math institutes. This program has been ss successful that there is a growing waiting list of students who want to participate in the special Math Institutes. So far the college attendance rate has been above 90 percent for participants.

For more information on the proposed legislation contact your legislator. Their phone numbers are in the government (blue) section of the telephone directory. The California Senate Hearings can be followed on the Internet at http://www.sen.gov/ © La Oferta Newspaper.