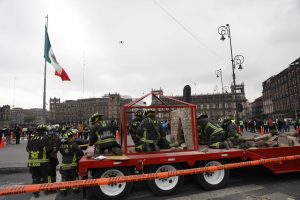 Mexico City, Jan 20 (EFE).- Millions of people participated on Monday in a nationwide earthquake macro-drill as memories persist of the last big tremor the country experienced on Sept. 19, 2017, that killed 369 people, 228 of them in Mexico City.

“I experienced the (quake) of 1985 and the one of 2017; and I was in a building that collapsed. I’ve lived it in the flesh. I hope that people raise their awareness of the risk they could be running,” Daniel Juarez, an office worker who at 11 am on the dot evacuated the downtown capital building in which he works, told EFE.

The event, according to Civil Protection authorities, was staged to reinforce the culture of prevention and to remind people of the steps they must take before, during and after a quake, with the end result that people know what to do and to be able to save the greatest number of lives if and when another temblor hits.

Angel Galindo, another office worker in downtown Mexico City, said that “it’s super important for there to be this kind of simulation because we’re prone to suffer these types of events.”

Both men said that since the magnitude-7.1 quake of Sept. 19, 2017, people have become more aware that they need to take such situations seriously.

“Since 2017, people are taking it more seriously. I think it’s a good measure,” Galindo said. 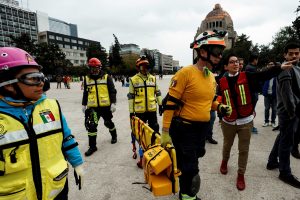 Meanwhile, Juarez said that although before people didn’t take such drills seriously and didn’t even leave their workplaces, “this is a measure that helps keep people safe and prevents catastrophes.”

The macro-simulation, the first of three that will be held in Mexico this year, served as a reminder of the potential for widespread destruction and loss of life that such natural events can wreak in urban areas.

The drill was intended to emphasize the fact that every citizen must have an emergency plan and must know what to do when a major earthquake strikes.

In the simulation, in which schools, government offices, businesses, civil associations and hospitals, among others, participated, the watchwords were “Don’t run, don’t shout, don’t push.”

Civil Protection national coordinator David Leon Romero said that 32 of the country’s states would be participating in this drill, although not all of them would be quake drills, with some opting to simulate other types of natural disasters that could occur in their territories.

He said that the National Emergency Committee issued a civil protection protocol, just like the majority of the government agencies, and each one will provide a report so that authorities can learn what areas to improve.

Mexico City Mayor Claudia Sheinbaum said at a press conference that eight million people in the capital participated in the exercise while 2 percent of the loudspeakers announcing the quake alert did not work properly.

She also said that authorities must attend to this and improve the information and education provided to the public given that nine people were treated by civil protection personnel for nervous crises – perhaps not realizing that the drill was just a drill – while three were treated for slip and fall incidents.